Imagine Cloud IO in the Home

In the second part of Emerson’s Anand Iyer‘s series on cloud I/O (part 1 here), he imagines a world with distributed sensors connected in a cloud I/O operating in a home to alert parents to impending incidents.

A Home application primer on intuitive processing. The most wonderful and also nightmarish time for any parent is generally when your child is a toddler. And you can also extend the situation for up to 3-4 years of age, when the child can crawl, walk and seemingly do so many ingenious mischief’s that you could not think possible by any human being.

A coin or metallic key that could be swallowed and sharp small objects look more dangerous than the WMD’s of the world combined together!!

Not so in this wonderful home of the future.

Ingenious Barbie also continuously scans for sharp objects, keys and other small items that need picking up. The Toddler processor picks up object alarms and sends reminders through the TV, mobile or music system as per the setup choice. There are to pick up list items, that are not urgent, but were Dennis to be in the proximity of this “Dangerous Object”, a high priority alarm would be sent to all systems. 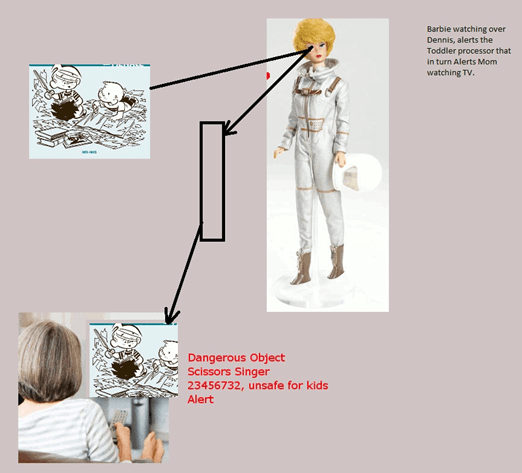 Of course, Dennis’s Mom and Dad have been arguing about upgrading Barbie to the latest version that can pick up the objects rather than send a disturbing message when the most important scene on TV is on!! Some things don’t change too much!

Nevertheless, the Toddler processor has to be intuitive to a certain extent. All the toys could be sending him information. For example:

The Toddler processor could also alert Mom and Dad about the first time Dennis performs certain acts like running etc.

Snapshot history processor. The snapshot processor picks up information on both Dennis’s habits and his elder brother’s history to tell at what weather conditions, Dennis is more likely to fall sick or what to store at what times. It also predicts what items Dennis is most likely to consume more based on elder brother’s history. The snapshot processor can also turn on mood lighting when Dennis is crying or turn on some toys to divert his attention of the toddler.

Based on earlier measurements, the snapshot processor can predict when the strain on the clothes or nappy worn is too tight (after meals) and when the measurement is too loose that the baby could quite naturally be hungry.

The home economy processor also picks up the product id, moisture information and presents to Mom and Dad, which nappy provides them with the best value for money. They can also enter information as to what nappies are not suitable for their Dennis. The home economy processor also picks up information from the Internet as to what new options are coming up in the market, when there is likely to be a sale and what quantities to buy during the sale and so on. Perimeter sensors. Fixed sensors at different places inside their home draw up a perimeter that is safe for Dennis to play. If Dennis were to approach any of these perimeters with his toys or his nappy on, a perimeter breach alarm is raised. Depending on the zones in his home, Dennis could be in a relatively safe zone like the living room or mildly safe zone like his bedroom or in dangerous places like the kitchen or his elder brother’s room.

Whenever Dennis crosses over from his safe play area to other dangerous adult areas an alarm could sound off.

With a mesh of intelligent sensors connected with smart monitoring and control systems, the possibilities are endless to improve safety and comfort.